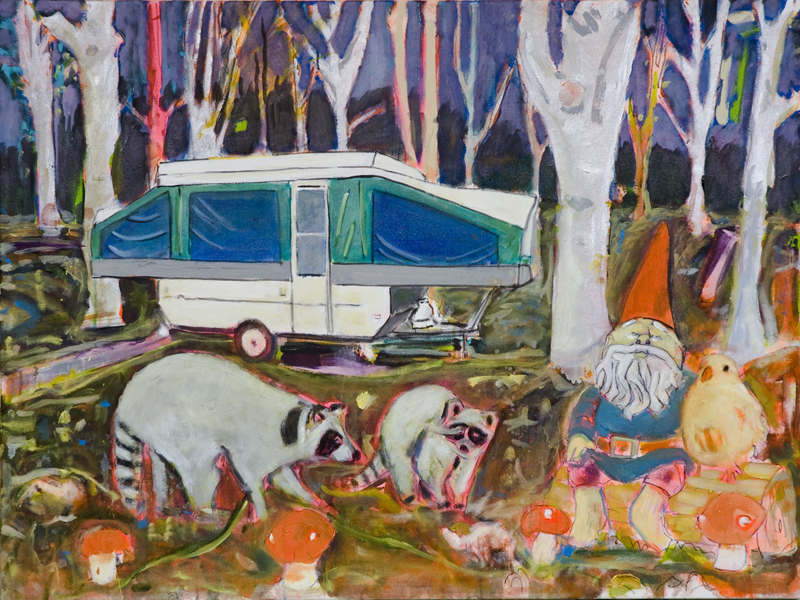 Quebec, January 12, 2019 — From February to May, Galerie.a celebrates current painting practices by presenting the exceptional work of 5 Quebec painters.

By February 2, 2019, it is with great pleasure that Galerie.a will open its doors for the first time at 17, de la Barricade Street, Suite 306, with « L’usage du monde » exhibit from Carlos Ste-Marie.

« L’usage du monde » exhibit, based on Nicolas Bouvier’s travel story and cult book, is Ste-Marie’s first solo exhibition in Quebec City since 2008. The artist brings together his most recent paintings which explore the alienations that rule living forms and their environments both natural and domesticated.

An environmental and political reflection

His paintings, little elegiac bestiaries, are reflections on shelter and the increasingly fragile environment for species now seen as « refugees ». The representation of alienations between living beings and their habitats, as we see it in his paintings, illustrates how shelter sometimes become a prison, a restraint of life itself.

While revealing environmental concerns, the paintings create a necessary dialogue between humans and animals. By the choice of strategic imagery, the painter depicts a Quebec identity and set this dialogue very close to home. The exhibition itself becomes a collective self-portrait. This iconographic familiarity encourages the travel through the art and universe of Carlos Ste-Marie.

With a formalistic approach analyzing, inversing and experimenting the gestures of painting, Carlos Ste-Marie freely associates different conceptual and relational dimensions. He envisions its projects as investigations of objects meticulously selected for what they connote in a reality seen as more arbitrary than ever.

Carlos Ste-Marie lives and works in Sainte-Brigitte-de-Laval. He has had several one-man exhibitions and participated in numerous international collectives and events in Quebec, Canada and abroad (Mexico, France, Poland, Cuba). His work is part of many private and public collections. His research in painting is supported by the Conseil des arts et des lettres du Québec and the Canada Council for the Arts. In 2000, he received the René-Richard Scholarship as part as his Master of Fine Arts at Laval University. Coming from the world of music, he pursues, along with its visual activities, a musical production first born more than 25 years ago.

Galerie.a, founded in April 2018 by Anne D’Amours Mc Donald, is an art gallery based in Quebec City specialized in the international promotion of present-day artists. By the implementation of events, special projects, fairs and exhibitions in Quebec and abroad, the gallery tends to develop an international network of artists and collectors who will benefit Quebec present-day art.

Located in the Old Port of Quebec, at 17, de la Barricade Street, Suite 306, the gallery aims to be an exhibition space close to the art community. By establishing its roots in a building regrouping more than thirty creators, the gallery wants to draw artists and collectors closer together. Intended to become a new destination for present-day art enthusiasts, this new space will host about ten guest artists each year.

The artist thanks the artist Pierre-Éric Villeneuve for its help and support.