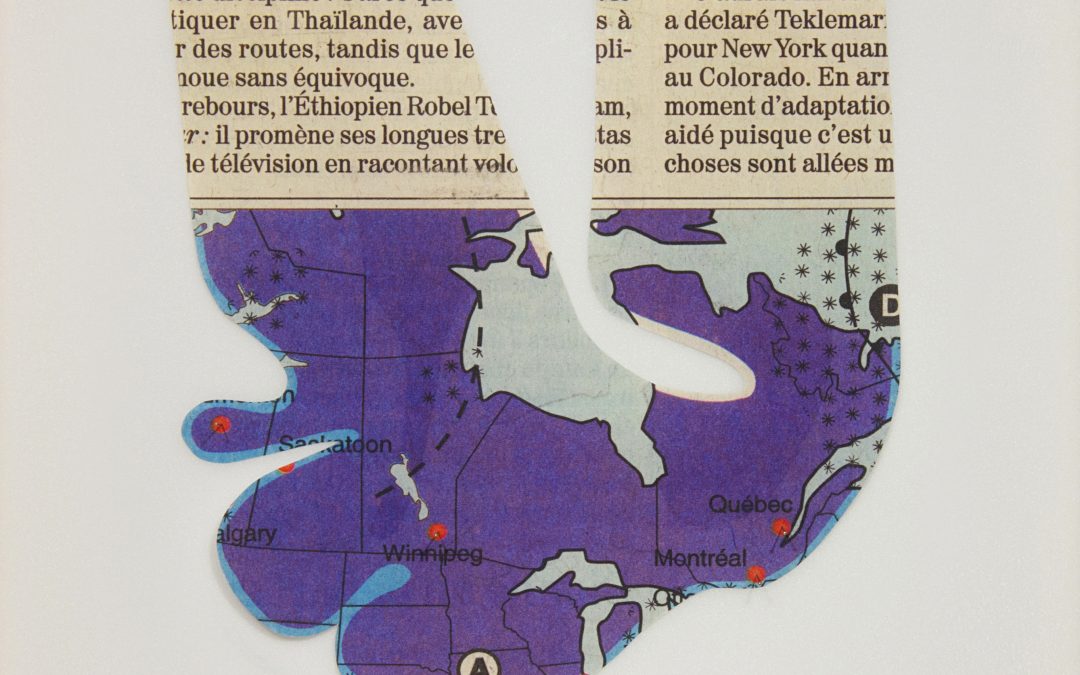 Sous le Soleil is an interpretation of current affairs as presented in the media using the paper sculpture technique that has been the artist’s signature medium for around two decades. The exhibition gathers globes, word clouds, and representations of climate change against a background of media crisis, unfolding and entering into dialogue in the gallery space.

Works on recycled paper are contained in etymology boxes and Erlenmeyer flasks, collecting and conserving elements of our everyday experience like so many time capsules. What can these newspaper cut-outs tell us?

As a child who grew up with the advent of sorting and recycling, Julie Picard’s art practice was a natural outgrowth of her environmental concerns; she reuses paper as both an artistic statement and a personal commitment. Through a poetic engagement with her materials, she calls into question the notion of permanence and idea of leaving a trace. Julie Picard’s oeuvre stands as a formal reflection on impermanence as a metaphor for human existence.

Active artist since the turn of the millennium, Julie Picard graduated with BAA and Master from Université Laval. She held her first solo exhibition at L’Œil de Poisson, which earned her the Prix Videre 2008 Relève among the Prix d’excellence des arts et de la culture de la Ville de [Videre Award for the Young Artists, Québec Excellence Awards in Arts and Culture, City of Québec]. The year after, she was selected by the CALQ to represent the discipline of sculpture in Beirut at the Jeux de la Francophonie, where she obtained the first prize of the international jury. She was invited to present her work at solo and group exhibitions, by putting forward her research on the transformation of recovered paper. Thanks to these participations in various contexts in Canada and abroad (France, Belgium, Switzerland, Germany, Poland, Lebanon), she also has carried out several residencies. The monograph Mettre sur papier (2015) Éd. La Chambre blanche presented her paper works from 1998 to 2014. We could see his recent work in solo exhibitions atGalerie d’art d’Outremont, Galerie d’Art du Parc de Trois-Rivières, Maison de la Culture Pointe-aux-Trembles and Centre culturel Notre-Dame de Grâce à Montréal, Vieux Presbytère de Saint-Bruno de Montarville, Foire Papier, Foire en art actuel de Québec and Foire d’art contemporain de Saint-Lambert. Recent achievements include the international triennials Global Paper, in Deggendorf, Germany, in 2015, and Papier de Charmey, in Charmey, Switzerland, in 2017, as well as Géopolitiques at Galerie d’art Stewart Hall curated by Katia Basta and Familiarités at Fondation Molinari curated by Madeleine Forcier.